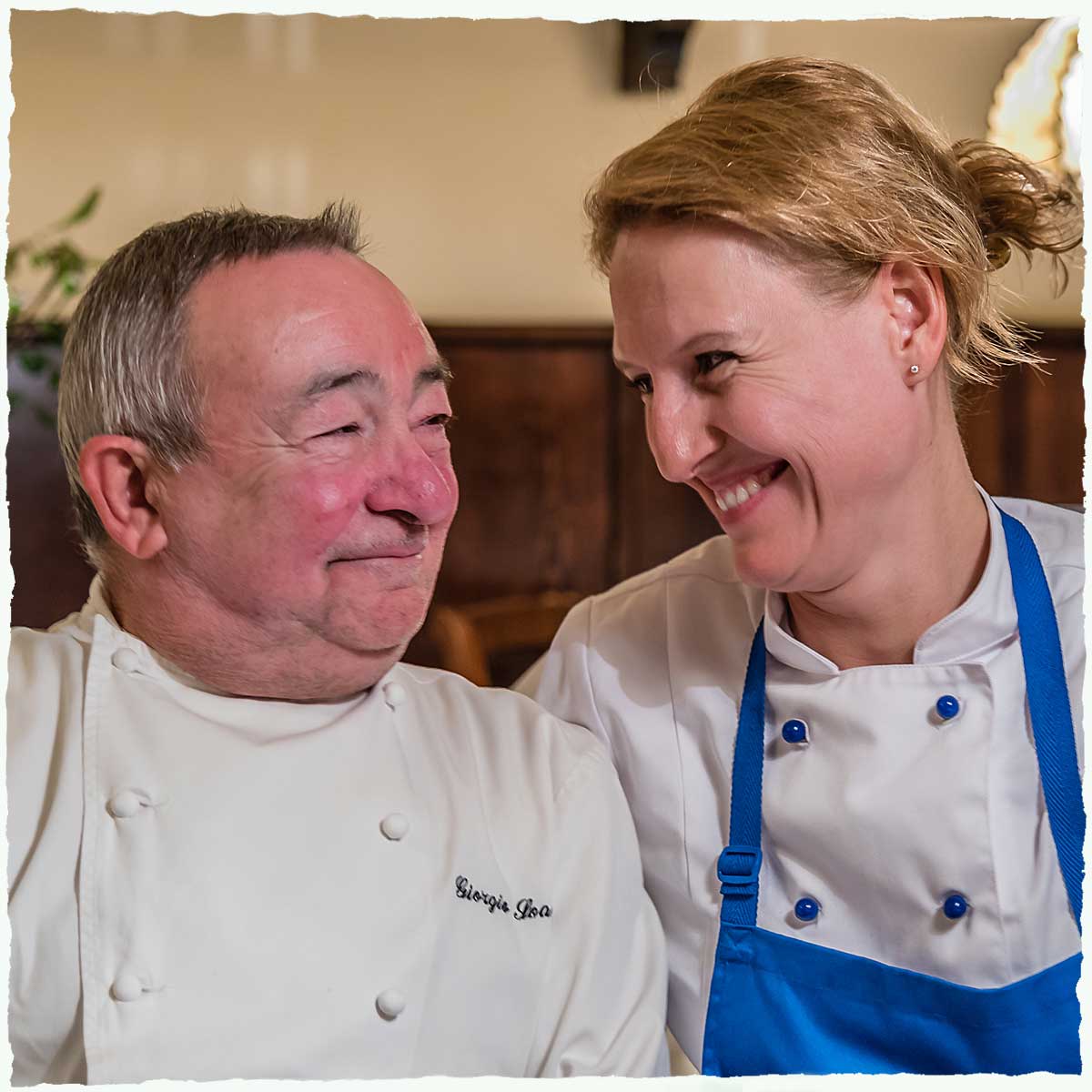 In 1980 Chef Giorgio Soave, who had 20 years of restaurant experience working for others, finally realised his dream, converting an abandoned house into his own restaurant. He called the restaurant “Groto de Corgnan”, “Groto” a word in local dialect meaning a small stream, which crossed the street “Corgnan” where the restaurant is located, in the village of Sant’Ambrogio di Valpolicella.

Giorgio prepared traditional, regional dishes, based on high quality seasonal ingredients, which he sourced locally from his own garden in Molina, and small suppliers in the regions of Valpolicella and Lessinia. For the following 18 years, Giorgio and his wife Assunta, developed Groto into one of the best and most famous restaurants in Valpolicella. In the mid 1990s, Giorgio’s sister, Elsa, started working at Groto supporting her brother in the kitchen and in the early 2000s Giorgio’s daughters starting working in the restaurant, Martina in the dining-room and Anna in the kitchen.

Groto de Corgnan has won many awards. It has hosted a variety of famous guests (sports stars, actors, politicians). Giorgio has appeared on national TV and been included in several books and magazines. Since 1981 Groto has been listed every year in the Michelin guide.

In 1999, Judy Harman visited Groto de Corgnan as a customer and fell in love with Chef Giorgio’s traditional Italian cuisine and his daughter Martina’s friendly and skilful service. For the following 16 years, Judy and her husband Jonny remained devoted and delighted customers of Groto de Corgnan, returning to dine at Groto at least once a year. Judy had worked for an international company since 1985 and was a passionate, amateur home cook.

In 2015 Judy chose her favourite restaurant Groto de Corgnan, to celebrate Jonny’s 50th birthday. After dinner that night, Giorgio talked about his daughters deciding to take different paths in life and that being 70 years of age, it was now too challenging to run Groto by himself. Giorgio then went on to say that he’d made the very difficult decision to close the restaurant and retire.

Judy immediately responded saying to Giorgio that Groto shouldn’t close as it was far too special and important. Judy suggested that instead of closing, and if Giorgio would be willing to teach and train her, she would change her career and life and come to help him keep Groto open. Giorgio accepted her offer and in 2016 Judy and Jonny moved from Sydney, Australia to Verona.

Ristorante Groto de Corgnan remained open and Giorgio and Judy worked side-by-side in the kitchen for two years. Today Groto is growing again and Giorgio continues to share his culinary knowledge and experience with Judy and the restaurant team. He now also has time to spend with his daughters, grandchildren and tending his garden.

Judy says she feels incredibly fortunate, because she has fulfilled her dream of having a restaurant and is able to learn everyday, doing something she loves… And importantly, Groto de Corgnan will remain open and continue to delight customers for several decades more.